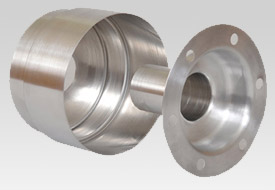 Elyria Metal Spinning blended the skills of a tool designer, a precision metal spinner, and a highly experienced machinist to manufacture fuel floats for a customer in the aerospace industry. The aerospace industry is known to be demanding, and our client was amazed at the quality and prompt delivery of the prototypes. These parts were particularly difficult because they had several different material thicknesses on the outer shells that were key to their function. What's more, we were kept to a weight limit for the completed components, which we controlled via close tolerancing on the material thickness.

Before we ever went into production of the prototypes, we helped the customer with design upgrades to guarantee the products would be efficiently produced. We began production of the fuel floats, which are used within an aircraft fuel tank, by circle shearing .060" thick 6061-0 temper aluminum. The aluminum circles were then spun and worked on our hand spinning lathe, during which the blanks were pressed against a spinning mandrel that was locked in the lathe chuck until the blanks assumed the finished shape of the mandrel. Using metal spinning, we were able to quickly and efficiently produce prototypes that would have been much more expensive if they were made using any other process. We then completed the project on our Bridgeport milling machine and CNC lathe, before die punching and finishing it with a non-woven nylon web impregnated with resins and minerals to improve the finish and increase the product life. The fuel floats were 3.5" in diameter, 3" high, and manufactured to exacting tolerances of ±.003", which was particularly demanding because this tolerance was maintained on a two-piece part. Following dimensional and visual inspections, we now deliver between 5 and 25 of these floats to our customer in Ravenna, OH in only six to eight weeks.

This project was an interesting blend of one of the world's oldest art forms-metal spinning-with the most advanced CNC machining to produce a critical component for the aerospace industry. To learn more, contact us directly.